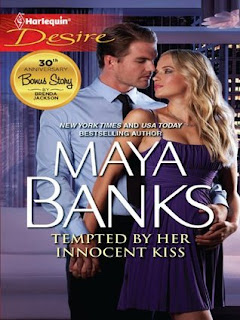 Tempted by Her Innocent Kiss

Devon Carter was her first; now newly wed Ashley wants their passion to last. But her dreams of true love are crushed by the discovery that their marriage is another of Daddy’s business deals. Her strategy: act the part of perfect wife and make Devon love her.

But Devon misses the bubbly, no-holdsbarred woman his wife used to be. Who is this Ashley with the steely demeanor of a society wife? And will he find a way to rekindle the fire in her eyes...especially now that she’s pregnant?

Devon'S marriage to Ashley is one of convinience. In order for Devon to merge Tricorp hotels with Copeland's he should marry Ashley. Ashley's father is willing to marry her off to Devon. Later on, during their honeymoon, she comes across evidence of what had transpired between her father and Devon,though at this time Devon has seriously began to like her, like her bubbly personality. He realises this as he notices the change in her. Ashley tries to change herself to fit the kind of woman she thinks Devon wants as a wife. It was really sad to see her going through this, suffering.
Later Devon, after realising how much he hurt her, tells her he wants her back, her real self. The real Ashley. It was good to see this transformation, from a man who was only interested in what he would gain materially, to one who is hopelessly inlove with someone who, at first meant nothing to him, but a way to enhance his business.

Really looking forward to read more from the author
Posted by Cecilia Robert at 06:40 No comments:

Review: Bared To You by Sylvia Day 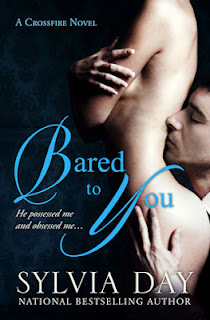 Gideon Cross came into my life like lightning in the darkness—beautiful and brilliant, jagged and white-hot. I was drawn to him as I'd never been to anything or anyone in my life. I craved his touch like a drug, even knowing it would weaken me. I was flawed and damaged, and he opened those cracks in me so easily...

Gideon knew. He had demons of his own. And we would become the mirrors that reflected each other's most private wounds... and desires.

The bonds of his love transformed me, even as I prayed that the torment of our pasts didn't tear us apart..

Eva and Gideon are two characters I enjoyed reading about. They are flawed, and even though at first it feels as if their relationship is based on sexual attraction, it gradually changes as they get to know each other. Each has issues, and both are possessive of the other. Eva has gone through so much in her life, and she is still struggling with the sheer weight of what happened to her years ago.
Cary, Eva's best friend also has some issues as well. So both sitck up for each other and encourage.

I am really curious to find out more about Gideon, his past. I'm definetely looking forward to the second book in the Crossfire series.
Posted by Cecilia Robert at 06:31 2 comments: