First, thank you  Entangled Publishing for including me in this tour. Today I have a guest post by Abby Niles, the author of Extreme Love, Top Ten Romance Heroes.  Can I just drop in there and add Dante 'inferno' Jones on the list, please? :) I'm currently reading Extreme Love and will be reviewing it soon. 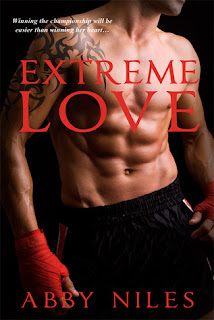 Used to the average Joe, Caitlyn Moore is overwhelmed when the supremely masculine Dante Jones walks into her life and expresses an interest in her. At first she pushes him away, refusing to encourage the attention of a cage fighter. Then she learns Dante has a love ‘em and leave ‘em reputation. What better way to fine-tune her non-existent flirting skills than with a male who won’t stick around? But Dante has no intention of being a practice dummy; he’s out for all or nothing. Now Caitlyn must accept Dante—violent career and all—or let him go.

Dante “Inferno” Jones has one goal: win the Welterweight Championship. At a time when focus is crucial, the last thing he needs is a distraction. Yet Caitlyn Moore becomes a challenge he can’t resist. When the light-hearted pursuit shifts to a battle to win her heart, his focus is shot. Faced with losing the biggest match of his career, Dante must decide if his extreme life also has room for Extreme Love.


We all love to fall in love with fictional heroes from books, TV shows, and movies. These men can range from the anti-hero, to the superhero, to the geek hero, to the boy next door hero. At times, women can even be divided onto opposing sides as they pull for their favorite hero to win the girl. Team Damon or Team Stefan, anyone?

Here’s a list of my favorite heroes who have graced the screen.

I’m starting with my sweeter heroes. I love a down-to-earth, quirky hero. I also have a tendency for forming a crush on the unconventional hero.

Westley. As you wish. How many dreamy sighs just sounded? The Princess Bride has been one of my favorite romantic movies since I was a kid. Westley was the first hero I ever fell in love with. In fact, to this day, I still can recite every word from the scene where Buttercup pushes the Dread Pirate Roberts down the hillside. I LOVE that scene.

Castle. I love him for his quirkiness, his humor, and those adorable clueless faces he makes. I also love him for how much he loves Beckett and even though he takes a humorous approach to living everyday life, he can become fierce and protective when he believes she is in real danger.

Leonard Hofstadter. My geek crush. That’s right. Being a romantic hero doesn’t mean you always have to be the hottest man alive to get the girls to swoon. You can be an uber-smart experimental physicist, who wears glasses and is so uncomfortable around woman you get a serious case of verbal diarrhea anytime one is around. I think Leonard’s innocence is what drew me to him in the first place. In that first season, he was just so uncomfortable around Penny, yet so freaking sweet I could just hug him. I’ve loved watching his character grow into a more confident man.

Peeta Mellark. The boy with the bread is the epitome of every boy I want my daughter to date. Seriously. He’s sweet, funny, charismatic, but will do anything to keep the girl he loves safe. I fell in love with the character when I read The Hunger Games trilogy, and this is a prime example of an actor being able to bring a character to life. I can’t imagine anyone but Josh Hutcherson playing Peeta. He was a perfect casting.

Henry Roth. Who you ask? He is the hero of 50 First Dates played by Adam Sandler. I’ve always thought Adam Sandler was adorable, but Henry Roth was the first character he played that I actually fell in love with. If you don’t know the plot, it’s about a girl who has lost her short-term memory and can’t remember anyone new who’s come into her life the next morning, including Henry. But Henry falls in love with her anyway. Guys, the scene in the end where they are on the boat and what he does for her every single morning to help her remember who he is gets me right in the chest every. Single. Time.
Now let’s talk about some of my bad boy romance heroes. We girls sure do love our bad boys, and I’m no exception. Bad boys can come in so many different ways; from the aloof, cold-as-stone heroes to ruthless fang-bearing killers. Yeah, wow. Wide range, huh?

Mike Chadway. The foul-mouthed, wants a woman on both arms, in-your-face hero from The Ugly Truth. Now a huge bonus is he’s played by Gerald Butler. But, I loved Mike’s rough around the edges ways. Was he sweet? No. Was he the gallant knight? Uh-uh. Did he have a habit of saying some ridiculously offensive thing? Oh, yeah, he did. Didn’t stop me from panting over him though. My favorite part? *Spoiler alert* At the end, Abby asks him, “You love me? Why?”  Mike’s response is “Beats the shit out of me, but I do.” I grinned when he said that, and whispered, “Perfect response.” Anything else from this character would have been wrong and that one line stayed true to his character even though he had fallen in love with Abby. I loved that!

Tony Starks, aka Iron Man. Iron Man is my all-time favorite superhero. Who doesn’t like a womanizing, rich, powerful male brought to his knees by a sweet, but strong woman? Anyone seen the trailer for Iron Man 3? I’ve loved watching Iron Man and Pepper get together, but I think this movie will give me that romance I really want to see.

Damon Salvatore.  The anti-hero. Damon is a complex vampire with a vicious streak and doesn’t apologize for doing what needs to be done to protect the ones he cares most for, even kill. Has Damon does some horrible things? The vamp has a very, very long list of unforgivable deeds. But just when I think, “Oh Damon, you’ve gone too far now.” He redeems himself.

Who are some of your favorite heroes?

I would like to thank Cecilia for having me today! It’s been a blast.

Was a pleasure having you here,  Abby. Thank you for taking time to stop by. :)

Abby Niles has always loved to read. After having twins and becoming a stay-at-home mom, she started doodling stories to keep her sanity. She didn’t plan for writing to become an obsession, but it did. Today, she juggles work, home life, and writing. It’s not always easy, but hey, who said life was easy?

When Abby’s not writing, you can find her playing ‘Just Dance’ with her kids or trying to catch up on her never-ending to-be-read list. She also loves Zumba, and refuses to admit she looks more like Animal doing his Muppet flail than a sensual Latin dancer.
Posted by Cecilia Robert at 00:24 2 comments: