G is for Gemini

Got the image from here


Gemini is the third astrological sign in the Zodiac, and I'm proud to say, I'm a Gemini. Although at first I used to ignore some facts about Gemini, I later came to find out that some are true as far as some traits go. Some characteristics I found to be true were: I tend to talk alot, and spontaneous, and can be indecisive at times.

Most Geminis delight in socializing, and they are almost always the ones who make a particular event a lively occasion. They simply love to entertain that’s why most of them take interest in hosting an event or performing in a crowd. They are magnanimous in offering their friendship to people. They have this gift of the gab, which makes them a good asset in every social circle as well as in work. In other words, they are the life of every occasion.

When it comes to serious matters such as work and love, Geminis are unique in a sense that they are born to become intelligent people. They are witty and sometimes, even cunning. They can also juggle multiple tasks without looking tired afterwards. As for communications, one can never be bored whenever he is around with a Gemini. A person who is born under this sign often makes it a point to carry out the conversation no matter how boring it may seem for him. Perhaps the most interesting quality of the Geminis lies in their being good at persuading people. Using their ability to communicate efficiently, they can easily get what they wanted from a person. Geminis are naturally charismatic, too. This is why most people fall for them even if they do not intend to please everyone.

However, since nobody is born perfect, a Gemini also has some flaws in his personality. The seemingly positive Gemini traits tend to backfire to the person. Being excessively spontaneous, Geminis can be viewed as reckless and flirtatious lot. Although they do not intend to act like that, the people around them tend to think otherwise. Another thing is their being indecisive. No one can exactly tell where their indecisiveness has rooted from, but this is true for most Geminis. Their minds tend to change every 15 minutes, albeit that would be a bit of exaggeration. Even though they are witty, there are also the times when they cannot simply make up their minds; especially if the matter seems to excite them. They love novelty and change, but in areas concerning love and career, this personality may not work for their own good. 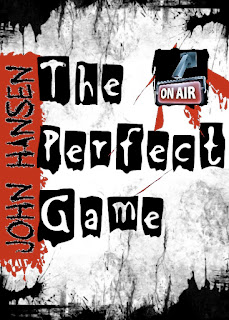 For a limited time—April 7th – April 8th—The Perfect Game by John Hansen is FREE on Amazon US, Amazon UK, and all other Amazons! Be sure to spread the word and download your FREE copy today! Here’s more info:
Blurb:
Entertainment is changing forever. Comedies, dramas, and reality TV shows are out. Murder is in.
In a world where murder is being exploited on TV, viewers watch live assassinations for their own entertainment. A hit game show where the challenge is to kill arises, stirring up remarkable popularity. Millions of viewers all across the globe watch it, vicariously experiencing the thrill of murder without ever committing the crime. And they all love it. Murder is the world’s latest and most remarkable excitement turned entertainment. But what happens when it goes too far?
---------------------------
What People Are Saying:
“The Perfect Game foreshadows the talents of a new talent.” – Aldo T. Calcagno, Amazon.com
“This is a short story like no other.” – Jenn, Amazon.com
“A bargain at 99 cents. Watch out Stephen King. You have company.” – Debra Spellman, Amazon.com
“What an amazing story!! Wow!! Still can’t get over how John’s mind worked in this one!! This is a MUST READ!!” – Brenda Romine, Goodreads.com
“I am so glad I read this book!” – Ana, Goodreads.com
------------------------
Excerpt:
The Perfect Game was an epidemic, a poison, a drug and although he knew it was bad, it was so addictive, so entertaining, so thrilling that Jeff simply could not stop. He loved The Perfect Game, loved how it changed him, strengthened him, darkened his moral and ethical views. It gave him this feeling of power, omnipotence, and violence; murder was a game, and he could do it freely. And it felt so good.
------------------------
Learn more at:
Goodreads
John’s Blog
Facebook
Twitter
Download for free for a limited time (only through April 7th and 8th!) here:
Amazon UK
Amazon US
Posted by Cecilia Robert at 02:23 No comments: 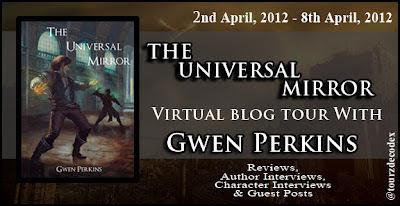 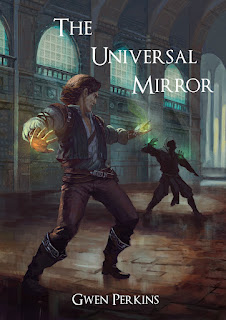 On the island of Cercia, the gods are dead, killed by their followers and replaced with the study of magic. Magicians are forbidden to leave their homeland. Laws bind these men that prevent them from casting spells on the living—whether to harm or to heal.


Quentin, a young nobleman, challenges these laws out of love for his wife. His best friend, Asahel, defies authority at his side, unaware that the search for this lost magic will bring them both to the edge of reason, threatening their very souls. The Universal Mirror shows how far two men are willing to go for the sake of knowledge and what they will destroy to obtain it

Building Cercia: The World of The Universal Mirror
Gwen Perkins
Grave robbing, healing plagues, and fighting mages—these are just some of the events that lie ahead for Quentin and Asahel, the protagonists of my new fantasy novel, The Universal Mirror.  This is fantasy that doesn't rely on dragons or elves but is centered by magic and moral conflicts.  Several readers and reviewers have commented on the richness of the setting as well as its medieval feel, wondering how the island of Cercia came to be and where I developed the details.  Today, I'd like to talk a little bit about the inception of this novel and the real history that inspired it to shed some light on this subject.
The novel itself began when I was talking to one of my children about Leonardo da Vinci and how he was one of the first artists to use human anatomy in his work.  I recalled that he had dissected corpses in order to learn how muscles worked and also recollected that this type of knowledge wasn't that typical at the time (and in fact, had been forbidden at one earlier point).  The idea lingered and I put away, thinking nothing much of it.
Now, I am not an artist.  I can't draw a straight line and the closest I've ever come to origami is making a thousand paper airplanes that never flew.  But like many who can't draw, I have an intense admiration for those who can.
It struck me as I was looking at some art on the internet that art is really a form of magic.  Which led me to further questions... why, in so many fantasy novels, were there so few prohibitions against magic by their governments?  Wouldn't a government try to control magic?  Wouldn't religion?  Then I began to wonder what would happen if a government did try to control it, how they might do so, and why they would have the need to do so.
Then I developed a fascination with lampworking which is the art of blowing glass into beads.  As I began to learn how to do this myself, I started reading about the history of glassblowing.  It was then that I discovered the story of the glassblowers of Murano.  Murano is a series of islands near Venice that became famous for glassworking when all the glassmakers in Venice were forced to move there in order to contain fires.  (This was in 1291.)  The glassmakers were unique on Murano—unlike other artisans, they were allowed to carry swords and held high status because of their art.  However, there was a caveat.  Because of the fear that the state would lose the secrets of making glass, the glassmakers were never allowed to leave.
If you've read The Universal Mirror, this sounds very familiar, I'm sure.  It's one of the Heresies—or prohibitions that govern mages—in the novel.
Once I had all of these pieces together, I transformed them into elements of the book.  The artists became magicians who were trying to work against the government because they disagreed with its prevention of scientific pursuit (in this case, healing).  The culture of magic changed as well as I incorporated the history of the Murano glassblowers into my own world, tying magic with class and social status while preventing those who practiced it from leaving Cercia.  These elements have also led to developments in the subsequent books I am writing in the series (and, I note, to researching all kinds of interesting stories and artifacts as one idea led to another).
In conclusion, I'd simply like to note that spending a little time thinking about and researching events that have happened before can greatly enhance even the most fantastic of worlds.  Don't be afraid to mine moments from your own life—people are still people, no matter what time or place they may be from.  Some ideas and emotions are, after all, universal.
Gwen Perkins is the author of The Universal Mirror, a fantasy novel released in 2012 by Hydra Publications. Read more about this book and her upcoming projects at theUniversalMirror.com. 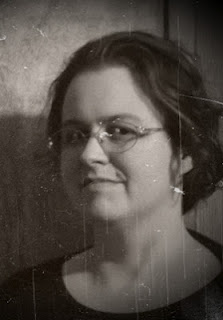 Gwen Perkins is a museum curator with a MA in Military History from Norwich University. She has written for a number of magazines, exhibitions and nonfiction publications. Her interest in history fueled the creation of the world of The Universal Mirror, inspired in part by people and events of the medieval and Renaissance periods. She lives with her partner and three children in Tacoma, WA.


The Universal Mirror is the first novel of the Artifacts of Empire series. Gwen is presently at work on the second volume, entitled The Jealousy Glass.

Posted by Cecilia Robert at 02:12 No comments: