I am a HUGE fan of Avatar: The Last Airbender--The Nickeledeon animated series, created and produced by Michael Dante DiMartino and Bryan Konietzko.  I was introduced to this series by my son almost two years ago. My life changed drastically after that. (At least my TV-watching life)

In this world, there are four kingdoms, each represented by elemental powers: Air Nomads, Fire Nation, Earth Kingdom and Water Tribes. Each kingdom has 'benders' who control the element. There is only one person capable of controlling all the elements.
The Avatar.

When an Avatar dies, he is reincarnated into the next Kingdom in the Avatar Cycle.  If the Avatar is killed while in the Avatar State --a state triggered as a self-defense mechanism, the cycle ceases, meaning, no Avatars.

Years ago--like way, way back -- the kingdoms lived in peace with the Avatar's guidance, until the Fire Nation Lord Sozin thought,  "Hey, why don't we  expand our territory?" One Person thwarted his plans: The Avatar. So he waited until this Avatar passed on, then decided to strike again. But then he learned that a new Avatar had been reborn in the Air Nomads.  He wiped the entire Air Nomads population  in search of this new Avatar. Luckily Aang, only twelve years old and frightenend by his responsibilities as the new Avatar had already fled with his flying Bison.

One word describes this series: Genius! If you like Fantasy or are planning to write in the Fantasy genre, or just curious, I would highly recommend this series.

This series follows the adventures of Aang, the last Airbender Tribe.

Just look at this face. Isn't he adorable?? Does he look a boy capable of  defeating the mighty Evil Firelord whose Intention is to rule the world? Probably not. Not at first though. 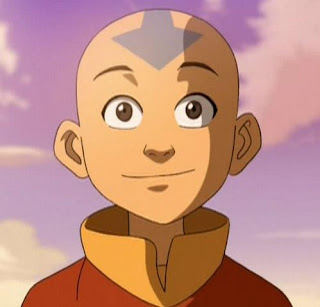 Aang is hilarious and playful, (he reminds me of a kitten), a typical twelve year old, trying to fit in the world both as the Avatar and a pre-adolescent boy. He is so positive about life (Maybe because his Mentor was a monk) Even when something bad  happens, he quickly bounces back to his forever joyful self. He goes through so much that everytime he appears on the screen, I just want to reach inside the Telly and hug him.

The story kicks off when two sibblings, Katara and Sokka  from the Southern Water Tribe happen to find an iceberg . They smash it open only to find it's Aang and his Bison. Apparently when Aang left his home years ago, he was trapped in a storm, fell into the sea and was frozen inside an iceberg. When he eventually learns what happened to his people, the Air Nomads, he is compeletely devastarted. From then on, they embark on a mission to save the world from the the current Fire Lord Ozai.

Sokka, the elder sibling is ridiculously funny. He has no water bending power whatsoever, and uses humour to cover for this arkwardness. Katara the younger sibling brims with power, but she needs to learn to control her Water bending.

Then there is the tortured prince, Prince Zuko.  Behold the flames, and that stance. O O. 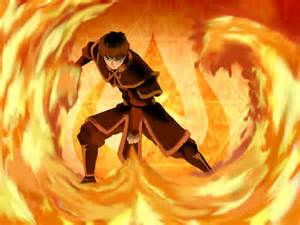 Prince Zuko is a Firebender and also Firelord Ozai's son. Zuko relentlessly purses Aang and his friends, and thwarts any progress they make.

The character arc in this series is pure brilliance. Zuko, the son who craves acceptance to finally the exiled prince, who defects from the Fire Nation and joins the Avatar. He also plays 'Robin hood' in this series, which just shows he isn't such a bad guy beneath all that brooding and scowling.

Aang the Boy who, once upon a time fled in fear of his responsibilities, finally accepted his role in life and worked toward stopping the Firelord.

Sokka, the hilarious non-bender learns that one doesn't need to any Kind of power to be powerful. The power lies inside all of us.
I found the whole concept of four nations very unique, plus the creativity used when bending the elements. Martial Arts!! . I think I need to stop raving,,LOL. This is a wonderful storyline, filled with twists and turns and subplots you won't see them coming until they crash into you..