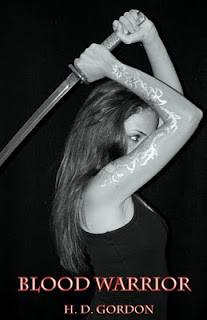 Author:            H.D. Gordon
Publish date: 5th September 2011
Source:             Book blog tour
Rating:                5/5 Stars
Description:
When her home is attacked by murderous vampires, 17-year-old Alexa is forced to leave her mother for dead in order to save her sister. She soon learns that she is the last known member of an elite race of supernatural Warriors, and is thrust into a world full of vampires and werewolves who all seem to regard her as some sort of savior. Meanwhile, Alexa battles a monster within herself that seeks to gain control; a monster that seeks blood.

The hidden city she finds herself in appears perfect, but Alexa's instincts tell her that all is not right within its walls. When she is asked to attend a school of fighters, whose exams consist of gladiator-style competitions, she must decide who she can trust among the smiling faces. And, when she meets Kayden, a vampire she feels undeniably drawn to, she must decide if she can trust herself.


I still remember the first day I saw her. I was new to Levland high school, and because all teachers seem to love to torture new students, I had to stand in front of the class and introduce myself. So, I stood up there, and said, “I’m Jackson Kane.” The teacher gave me a look that I guessed was supposed to be encouraging, but I didn’t have anything else to say, so I just stood there. Of course, I wasn’t off the hook that easily. When it became obvious that I wasn’t going to offer any more information than was absolutely necessary, the teacher asked the class if they had any questions for me. I had to swallow so that a growl wouldn’t escape my throat.
I suppressed an eye roll when most of the girls in the class shot their hands up into the air. I stood there watching them all practically drooling in their seats. You’d think they’d never seen a male before. With the way they all were leaning forward in their seats, batting their made-up eyelashes and smiling like they’d just received an unexpected present, it was hard to miss the girl in the back of the class who was reclining disinterestedly while chewing off her fingernails. But, really, it would be hard not to notice her in any crowd.


I found it hard to take my eyes from her. When she finally looked up, and caught me staring at her, she fixed me with glare that made the wolf in me sit up and take notice. A perky blond in the front row spoke up, and I pulled my attention from the strange girl. “Hi, Jackson,” said the blond, and the way she was looking at me made me want to pull the front of my flannel shirt closed, even though I had a t-shirt on underneath.


“Do you have a question for Jackson,” asked the teacher, when it became apparent that the blond was just going to keep smiling at me.


The blond girl flipped her hair over her shoulder. “Yes… Do you have a girlfriend?”


The girls in the class erupted into giggles. Most of the boys had their eyes narrowed. So that I wouldn’t do something rude, like bare my teeth at the blond, I found the face of the girl in the back of the class. She was a small girl, but I could tell that most of her weight was muscle. She had long, dark brown hair and big brown eyes. Her eyes were what caught my attention. I could tell by looking at her that she was not in what would be considered the “popular” crowd, and I thought that that was probably the way she wanted it. Despite her delicate stature, the look that hid behind her eyes was somehow… intimidating. And, she was smirking at me, seeming to enjoy watching me squirm at the front of the class. The wolf in me took notice once more.


Apparently, the blond girl’s question wasn’t what the teacher had been hoping for, and she glared at the girl before telling me that I could take a seat. I moved to the back row, and took the empty seat next to the strange girl with the intimidating eyes. Folding myself into the seat beside her, I sat there staring at her like a puppy does a bone. She ignored me for about twenty minutes, and when I kept staring, she finally turned toward me. I smiled. Her beauty was what struck me first. She wore no makeup, and her hair was just thrown up into a sloppy ponytail, but the way her dark lashes framed her dark eyes, and how her cheekbones were set high and at perfect angles, and the way her full lips seemed so inviting, even though the look on her face was annoyed… there really aren’t any other words for it. Just Beautiful.


“What?” she whispered, and her aggravated tone made my smile widen.


She turned back to the front of the class, where the teacher was absorbed in her lesson. I waited for her to respond, but when I realized that she wouldn’t, I pressed on.
“What’s your name?” I whispered.


Her head whipped back toward me. “Not interested,” she said, and turned back to the front of the class.


I scratched my head. “Pretty name.”


When she looked at me again, her face said that I was stupid, but I thought that maybe a small smile passed behind her eyes. Encouraged, I spoke again. “I’m Jackson.”


She raised her eyebrows. “Oh, good thing you told me again. I missed it the first two times.”


This finally got a response. “No, what?” she asked.


This actually made her laugh a little, and the teacher swung around to glare at us. When she resumed her teaching, the girl turned back toward me. “Alexa,” she said.


I raised an eyebrow. “Alexa… hmm, for a minute there, I thought your parents must hate you.”


Alexa crossed her arms, and a dark look came over her face. What had I said wrong? I wanted to see her smile again. I wanted to hear her laugh again. Really, I think that I just
wanted… her. I said the only thing I could think of. “You’re beautiful, Alexa.”


I smirked. “You have no idea, darling.”


She laughed again. I smiled. Alexa. I was pretty sure I loved that name.
After reading Blood Warrior in Alexa's POV, reading Jackson's POV was a real treat as well. :)
I enjoyed reading how they met the first time, and of course, Jack being as charming as he always is. And just as funny.

Blood Warrior has one of the best Chapter One opening and ending  I’ve  ever read. Chapter one begins: "It wasn’t dead when I found it." And ends with “The book fell at exactly the same moment the door opened.” This suspenseful writing continues throughout the book, every chapter ends with a sentence that makes you eager to turn the next page and see what happens next. And trust me, you won't get disappointed.


Alexa's life changes when they are attacked by beings she never knew existed. Then she finds out she is not the person who she always thought she was, but more, and one of her kind. As the story advances, we get to meet other characters, interesting characters, experience her turmoil at the stuff going on around her.
The other thing I enjoyed about this book were the characters, both the main and minor characters. The author did a great job. Alexa is tough girl, who hides her pain from the world and will do anything for the people she loves, and those she doesn’t even know. And extremely witty. I found myself laughing at some of her thoughts and answers.
Jackson, Alexa’s best friend is just awesomely sweet, loves and accepts her. And one of the people Alexa allows to get close to her. And always makes her smile.
Kayden is this brooding guy (don’t we all love those *grinning*) but he has a reason for being the way he is. Upon meeting Alexa - although the story is written in Alexa’s POV - his actions speak what his lips don't. And the fact that she has the capability to make Kayden smile and laugh, these two compliment each other in all ways. The more you read their story the more you discover just deep they are meant for each other. Intriguing.
The ending came so unexpectedly – in a good way- leaving me thirsty for the second book.
I highly recommend H.D Gordon’s Debut novel to all paranormal stories fans.
I am really looking forward to the next novel in this series.
Posted by Cecilia Robert at 02:56 25 comments: