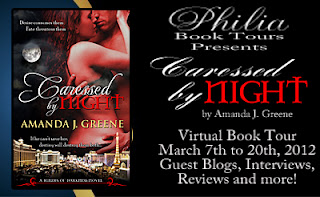 Author: Amanda J. Greene
Book Title: Caressed by Night (Rulers Of The Darkness #2)
Date of Publish: February 29th, 2012
Source: Philia Book Tours
Rating: 4/5 stars
Book Summary
Dimitri Arsov, the last remaining pure vampire, was thought to be dead for the past four hundreds years. Now, he is back and has a score to settle with the traitor that had tried to kill him centuries ago. But as he waits for his prey to blindly step into his carefully laid trap, his overwhelming hunger for blood is triggered when he saves a beautiful art historian.

Kerstyn Ingmar’s life was normal and straight up boring until the night she is rescued by the dangerously sexy, powerfully mesmerizing, Dimitri. Unable to resist his diamond blue eyes and intense kisses, she is drawn into his world of darkness and closer to her impending doom.

While their desire consumes them, Dimitri is haunted by images of a bloody and deadly future. As his enemies draw near, he must find a way to save his mate from her destiny before fate destroys them both.


from Goodreads
My Review
I received a copy of this book for the blog tour, and I have to say I’m glad I got to read it. I liked Ms Greene’s take on how vampires are created –The Ancient Vampires(Purebloods) that is. Completely unique.
Dmitri Arsov is a the last Pureblood with unfathomable powers. Many years ago Ven, his would be successor arranged to have him killed by Red Order witch. Thankfully for Dmitri’s ability to see the future, he played along, and let Ven think he was dead. Centuries later Dmitri decides it is time to claim his rightful place as the King, as well as claim his mate.
I love a good vampire story, and this one is good. Kerstin is a strong character, and stands her own ground. Oh yeah, she does faint once, but who wouldn’t be overwhelmed after finding out so much about things hidden from mortal’s world, as well as event’s that would really change everything? As she said, Ignorance is bliss.
Mmh, I wonder who Ms. Greene will write about next. Hopefully Gabriel? Among the minor characters, he is my fave. He is just soo tortured.
I’ll be sure to pick the first book in the series ‘Caressed by Moonlight’ and read Dorian’s story. He does seem like an interesting character.
Recommended for fans of vampire stories which have a healthy dose of steaminess.