Hello friends, Happy Monday! :) Reaper's Novice blog tour starts today, and I am so excited. Thank you to everyone who signed up to host me, took time to read and review, sent messages that made smile and/or giggle, or left comments, because God knows I needed that. Thank you for spreading the word about my latest book. Words can't express my gratitude. :) *hugs*

I will be giving away awesome swag. Would you like to win a keepsake, Amazon Giftcard or Reaper's Novice ebook? The rafflecopter is located at the end of this post. Thank you for stopping by. 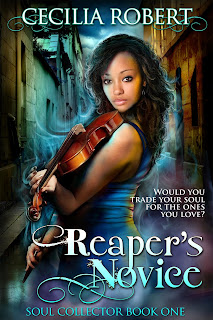 Seventeen- year- old Ana Maria Tei’s life has always been perfect: loving parents,  good grades, and a future so bright it outshone the sun. But now words like “separation” and “divorce” are sending her world plummeting to hell. Determined to keep her family intact, Ana plans a family-bonding trip from Vienna to Tuscany. Except fate has other plans. Ana’s parents and siblings are killed in a car accident on their way to pick Ana up from school.

Enter Grim, aka Ernest. He promises to relinquish the four souls if Ana agrees to trade her soul for theirs and serve a lifetime as his novice. In order for Ana to graduate from her Reaper’s Novice station to a Soul Collector graduate, Grim puts her to test. To her horror, she finds out becoming a Reaper’s Novice didn’t happen by chance.  It was preordained, and she is forced to make a choice:  save her family’s souls or come to terms with who she really is and complete the task set for her.

For the Love of Film and Novels ~Six Words

What the Cat Read ~ Review

A Diary of a Book Addict ~ Review

Head Stuck in a Book ~ Review

Ever and Ever Sight ~ Review

All in One Place ~ Review

A Book So Fathomless ~ Excerpt

Books Through the Garden Window ~ Review