On spoltlight today is another brilliant author from 'The Day The Sun Stopped Shining' Blog Tour. His book, The Substitute, is a Paranormal Comedy published by Soltice Publishing. The novel offers a hilarious romp through the final days of Miss Havana’s life, her trials in purgatory, and her afterlife with Lucifer. Witty and spicy, it leaves readers in tears of laughter. 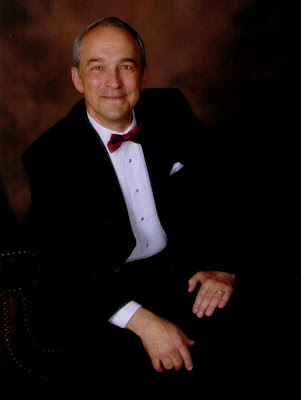 
Although his Bachelors, Masters and Ph.D. are in Chemistry and Meteorology, James worked as a scientist and system/software engineer before retiring a third time, then turned to writing. Extensive travel, from Thule, Greenland to Australia’s Great Barrier reef – and to dozens of countries in between – provide the real-life experiences he incorporates into everything he writes.

James enjoys boating, kayaking, skiing, traveling, hiking, tending nine grandchildren (no more than two at a time), and ballroom dancing, but his first love is writing. He has completed seven novels and one short story, and intends to continue writing in the Sci-Fi and Paranormal Comedy genres.

Miss Havana’s public persona was far from the truth because, in her capacity as substitute teacher, the small community where she lived knew her as the breathtakingly beautiful young woman who demanded every student learn, but in her private life, ostensibly caring for aging parents in Chicago, she raced through the lives of powerful men, leaving a wake of destruction…and a deep desire for revenge. Little did she realize her conflicted life would end in a chaotic death at an early age, and to eternal conflict with the devil. The surprise ending will leave the reader stunned and gasping for more.
Book Excerpt:
Therefore, I devise a plan to murder her outright, assuming she and I are still approximate equals, although that assumption could get me in a great deal of trouble. Nevertheless, doing nothing will seal my fate and that’s not acceptable either. I remove Mr. Fixit from its storage box under the kitchen sink, the knife I used to assassinate my parents, and hone its blade razor sharp in anticipation of a quick kill. Miss Havana mustn’t see it coming. Therefore, I will act quickly, catching her by surprise when I step boldly out of the shadows and shove the knife deep into her heart.


My heart flutters as I relish the thought of the bitch gasping for breath as every ounce of strength ebbs from her dying body. I also feel deeply confident I will be doing the underworld a great favor because Miss Havana has brought nothing but pain and suffering to males like me since her birth.
Moving with great stealth, Mr. Fixit and I find a darkened niche just past a sharp bend in the tunnel between my lair and the great Hall of Judgment…and wait, but not for long. Soon I hear them shuffling along, although Lilith seems to be in a chiding mood over some judgment she considered frivolously lenient. The moment Miss Havana steps past my niche, I leap out behind her, pull her head back by her hair, and shove Mr. Fixit hard toward her solar plexus, knowing it will instantly rip through the muscles of her sinister black heart.

Unfortunately, before Mr. Fixit can reach its target, my arm slams against an impenetrable wall at about the same time I feel Mr. Fixit’s cousin prick the waddle under my chin. I barely have time to call out “Waldo!” before Miss Havana’s blade begins to draw blood. Thankfully, the fool responds immediately, and grabs Miss Havana’s wrist before she can complete her upward thrust.
Lilith stands to the side, shaking her head in disgust as the four of us dance awkwardly in a cozy little circle—Croco holding back Mr. Fixit, Waldo holding back whatever Miss Havana calls her friend and Miss Havana in my not so loving embrace. Shit! Who knew she’d have help!

Amid all the commotion, Croco breaks the silence, apparently sensing his moment of saving Miss Havana might be a good time to confess his transgressions. His fierce glare softens as he lowers his enormous chin in Miss Havana’s direction. “I’m sorry, My Queen. I have failed you. I’ve lost your little box.”

As if the stupidly insipid moment of confession isn’t bad enough, Miss Havana actually encourages the bastard even as she continues fighting against Waldo’s strength to shove the length of her knife deep into the underside of my skull. She snarls through frothy spittle at the edge of her mouth. “It’s alright, dear. I’ve already found what it contained.”

The jostling, grunting and shoving continues despite Waldo and Miss Havana inanely baring their blacked hearts to one another until Lilith sternly commands, “Enough!”

To my surprise, the walls of my home actually shake as her order pierces our ears like thunder. I truly believe Miss Havana, Croco and Waldo are as shocked as I because our dance troupe abruptly stops gyrating and we all look cautiously toward Lilith.

Frankly, what I see there scares the crap out of me because her bloodthirsty glare is augmented by the equally evil glare of four ferocious-looking creatures that stand rigidly resolute behind her. I have been here a long time, but never in my existence have I seen such horror stalking the halls of my home. For the death of me, I have no idea where she found them, especially since their apparent ferociousness seems to mimic hers. I fear they all mean business and I am not easily fooled.
Oh, what a great excerpt! Thank you for sharing, James.
To link up with James, get to know him, his work or generally what he is up to, http://cookinwithmisshavana.blogspot.com/,
Paranormally Yours,
CeCe
Posted by Cecilia Robert at 20:50 2 comments: