Welcome to Homecoming's ARC tour which kicks off today 14th October to 19th October. I would like to thank Vicki Trask, Cara Crabtree, Stephanie Parent,Angie, Meradeth Houston, Taneesha Fredus, Samantha Martin, Megan Cole, Sarah Brown and Angela Brown who took a chance on me and signed up to help me with this tour. Thank you so, so much!!

I am SO excited to introduce to you this new series Cloaked Devices, which is set in Anndesia, a fictional world 75 years after WWII. Homecoming is a paranormal romance with steam punk and fantasy elements, and features Shifters as well as humans with elemental powers.

For a chance to win one of 3 Homecoming's ecopies up for grabs, US$ 25 Amazon gift Card and an ecopy of Reaper's Novice, the rafflecopter can be found at the end of this post. 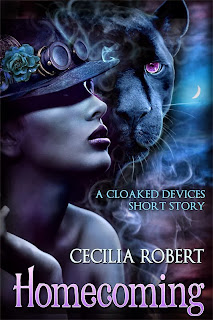 Buy links will be up before the official release date, October 25th, 2013.

a Rafflecopter giveaway
Posted by Cecilia Robert at 13:20 6 comments: