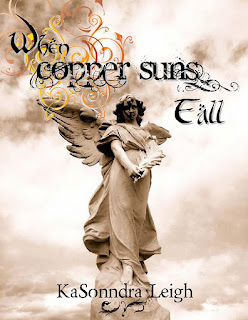 When Copper Suns Fall
YA Dark Urban Fantasy
By KaSonndra Leigh
In fifteen-year-old Chela Prizeon’s city, alchemy is forbidden, and angels hide among the mortal. With a deadly virus ravaging the globe, Chela’s nightmarish memories compels her to experience a past riddled with gloom, and now her brother is infected.

Chela’s only hope is the Caduceans, slayers sworn to protect the last seven Light Keepers and the ancient memories they share. A group led by the sometimes elusive, sometimes infuriating boy who intrigues Chela. But can she trust this boy with the mysterious past, someone who can influence her memories?

With the Caduceans aid, Chela races to defeat her rivals, to unearth dark family secrets, desperate to find a cure…only to discover the glutovirus is far more than a simple disease.

In this haunting debut, KaSonndra Leigh offers an escape into a world as intriguing as The Mortal Instruments and a story as chilling as Enclave. Full of celestial creatures, fascinating villainy, high-stake choices, and a secret romance, When Copper Suns Fall, is a fresh and original urban fantasy—with a dystopian twist—that will take readers on an unforgettable adventure.
Amazon Kindle

An Excerpt from When Copper Suns Fall: a YA Dark Urban Fantasy
By KaSonndra Leigh
Forcing my eyes to open, I found myself outside the Cradlehack. I was standing in Faris’s arms, my head against his chest, my fingers entwined in his black vest. It was a smooth fabric that felt like silk. A cloth no one had worn outside of ceremonies since before the Tidal Years. This boy was no common citizen. His earthy-sweet smell made me feel hypnotically safe, as we stood among the crowd fleeing down the hillside. He lifted my chin, stared in my eyes. But this wasn’t some dumb player’s move.
No, a mysterious thing stirred behind his silvery-gray eyes.
“Feel better, Chela?” he asked. I nodded.
“Thanks for helping me,” I said, still fighting a light head. Still afraid the dreaded black blobs lingered somewhere around us. Somewhat ashamed I’d spoken so horribly to him moments ago.


“You probably shouldn’t do that,” he said.
“Do what?”
“Thank me.”
“Why? Because I caught you using alchemy? That’s what your kind does. Make magic in the shadows, right?” I said.
His left eye ticked. The girl in the hoodie had called him a Caducean. Could it be possible? Father told me Caduceans were a mythical group—demon slayers from a time long gone. Yet, here I stood with a boy who didn’t deny my claim.
Around us, fewer people were leaving the Shack. They paid no attention to the two idiots standing and staring at each other. Did Jalen and Lexa make it out safely?  They were taking forever to reach me.
Did I really want them to find me?
“They’ll call me, now, and make me a witness against you. I’m sorry, but I already have too many problems. So I—I have to tell the truth,” I said.
“That won’t be a problem.” Faris smiled, a catchy one that lit his face up. I couldn’t decide whether it was angelic or downright wicked. Just like I couldn’t remember where I’d ever heard an accent like his. What kind was it? Old southern? Old English? Irish? It sounded like a mix of all three, but with a deep timbre, making him sound god like. “In a few minutes, you won’t remember me or any of this.”
“Really? How do you figure that?” I asked, heart racing.
“Because my gift to you…” He moved his face closer to mine, pulling me into whatever was happening in his head. “My gift is to remove memories that cause you pain.”
“Okay, um, right.” Had I lost my mind? It probably wouldn’t have hurt to scream.
He held my gaze, locking me into something I couldn’t explain. A tear puckered up in his left eye, and slid down his cheek where it stopped on his top lip. Then he blinked, snapping us out of whatever place he’d taken us to, and glanced behind my head. “Here comes your dark knight,” he said, easing his arms away from me.
He strolled off into the last group of stragglers hanging around the Shack. How did he know my nickname for Jalen?
I wiped away a tear rolling down my right cheek.
“Chela, there you are. You scared me, girl.” Jalen’s voice cut into the moment. He spun me around to face him. I blinked, clearing my eyes. “What’s wrong? Did you get hurt?”
I glanced around us. The boy was gone. A dull headache joined the fuzziness in my head. Lost inside a clouded mind, I forgot what I wanted to say. The entire night’s events were hazy.
I fumbled with my thoughts.
What happened to me in there? About the Author:
KaSonndra Leigh lives in the City of Alchemy and Medicine, North Carolina. She likes to write about teens doing fantastical things in magical worlds. Her two sons have made her promise to write a boy book next.
She holds the MFA in creative writing, and loves to play CLUE, Monopoly (the Indiana Jones version), and Pandora’s Box (good writer’s block therapy). She lives in an L-shaped house with a garden dedicated to her grandmother. It has a secret library complete with fairies, Venetian plastered walls, and a desk made out of clear blue glass.

Thank you Ms. Leigh for giving me a chance to read this book.  This is a wonderful story, starting with the beautiful cover to the essence of the story.
I enjoyed reading this book a lot, and now that I am through, I’m going to catch up on my sleep. That’s how good the book was as I read page after page, eager to know what happened next.
The story starts off slow as Ms. Leigh gives us a view of the world she has created. The story is built around a dystopian society where rules are the order of the day. Chela the 15 year old female protagonist  is determined  to find out what happened to her brother who has been lying in a coma for one year after an accident and infection of the glutovirus. As her 16th birthday draws closer, she stops taking her medication provided by the government thinking back on words her brother had warned her about the medications and is more resolute to investigate the events that might have led to her brother being where he is. She meets two boys; The mysterious Faris who has a secret of his own and becomes her Protector, and Seth who also has a secret of his own and wants her for his own purposes. They completely change the way she sees life, and leads to her finding out who she really is, the role she is meant to play in life and difficult choices she has to make.
Ms. Leigh created characters I fell in love with, even the minor characters in the story. Chela’s character development was well drawn out. At first we see a girl who abides by the rules and is shy, though determined.  As the story advances, we catch a glimpse of her growth, as she realizes her full potential and fights to protect the people she loves, even with the huge responsibility hanging over her head.
I enjoyed how she weaved the story, her descriptions of the world through Chela’s senses.
I look forward to When Copper Suns Fall follow-up story and I recommend  it.