The Fairest Of Them All by Carolyn Turgeon 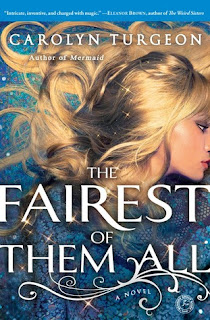 
What if Rapunzel was Snow White’s evil stepmother? From the author of Godmother and Mermaid, The Fairest of Them All explores what happens when fairy tale heroines grow up and don’t live happily ever after.


Living in an enchanted forest, Rapunzel spends her days tending a mystical garden with her adoptive mother, Mathena. A witch, Mathena was banished from court because of her magic powers, though the women from the kingdom still seek her advice and herbal remedies. She waits, biding her time to exact revenge against those who betrayed her.


One day Rapunzel’s beautiful voice and long golden locks captivate a young prince hunting in the forest nearby. Overcome, he climbs her hair up to her chamber and they fall into each other’s arms. But their afternoon of passion is fleeting, and the prince must return to his kingdom, as he is betrothed to another.


Now king, he marries his intended to bring peace to his kingdom. They have a stunning daughter named Snow White. Yet the king is haunted by his memories of Rapunzel, and after the mysterious death of his wife, realizes he is free to marry the woman he never stopped longing for. In hopes of also replacing the mother of his beloved daughter, the king makes Rapunzel his queen.


But when Mathena’s wedding gift of an ancient mirror begins speaking to her, Rapunzel falls under its evil spell, and the king begins to realize that Rapunzel is not the beautiful, kind woman he
dreamed of. 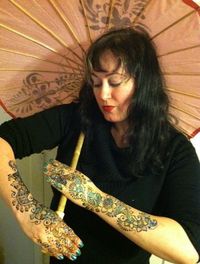 Carolyn Turgeon is the author of five novels: Rain Village (2006), Godmother: The Secret Cinderella Story (2009), Mermaid (2011), which is being developed for film by Sony Pictures, and The Next Full Moon (2012), her first and only book for middle-grade readers. Her latest novel, The Fairest of Them All, comes out in August 2013 from Touchstone/Simon & Schuster and is about Rapunzel growing up to be Snow White's stepmother. She lives in Pennsylvania and New York and teaches fiction writing at the University of Alaska at Anchorage's Low-Residency MFA program. She's currently at work on a new novel about Dante's Beatrice, set in thirteenth-century Florence.


(1) Signed paperback of The Fairest Of Them All by Carolyn Turgeon.


*The giveaway will be international*
a Rafflecopter giveaway
Posted by Cecilia Robert at 20:52