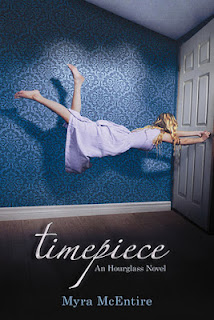 A threat from the past could destroy the future. And the clock is ticking...

Kaleb Ballard's relentless flirting is interrupted when Jack Landers, the man who tried to murder his father, timeslips in and attacks before disappearing just as quickly. But Kaleb has never before been able to see time travelers, unlike many of his friends associated with the mysterious Hourglass organization. Are Kaleb's powers expanding, or is something very wrong?

Then the Hourglass is issued an ultimatum. Either they find Jack and the research he's stolen on the time gene, or time will be altered with devastating results.

Now Kaleb, Emerson, Michael, and the other Hourglass recruits have no choice but to use their unusual powers to find Jack. But where do they even start? And when? And even if they succeed, it may not be enough...

The follow-up to Hourglass, Timepiece blends the paranormal, science fiction, mystery, and suspense genres into a nonstop thrill ride where every second counts.

Timepiece picks up where Hourglass  left off. Only this time, the story is told in a different character's point of view, one of my favourites. Kaleb.  In Hourglass, he seems like this extremely goodlooking bad /tortured boy. In timepiece we see his side of the story, the reason he acts the way he does.He is burdened with guilt for not being able to take the pain from his mother when his father died. And now that his father was saved and pulled through time to the present, Kaleb feels he doesn't measure up to as Michael does to his father. Feels his father prefers Michael to him.

We finally get to meet  the people behind the organisation Chronos when one of them appears and gives them an ultimatum to make sure they find the elusive Jack. Jack on the other side, is desperately searching for the Infinityglass which would help him go back to the past. In the meantime, since time is messed by the back and forth of time travelling, the frequency of the rips has increased.

Kaleb's voice is portrayed so well, his struggles, him falling inlove with Lily, Emerson's bestfriend - which was just awesome,  and the kind of character he is: the kind of person who takes care of others first before even thinking about himself.

The pacing was perfect, the action non-stop. It was good to see Emerson and Michael around.  Kaleb and Lily's romance was believable and really sweet.


Jack is still on the prowl. Look forward to reading Infinity Glass.
Posted by Cecilia Robert at 09:05

Email ThisBlogThis!Share to TwitterShare to FacebookShare to Pinterest
Labels: Myra McEntire, YA Review