Cover Reveal, Call Of The Sea by Rebecca Hart 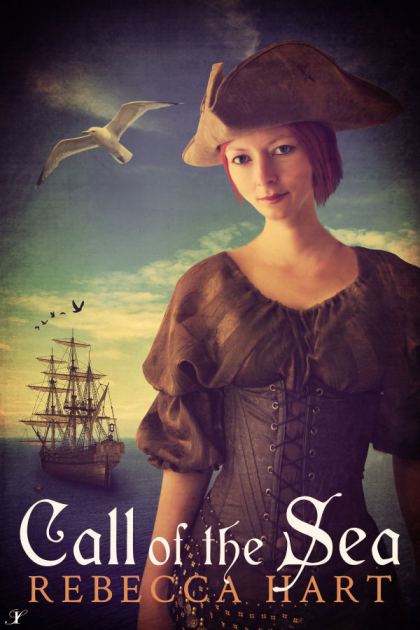 From the cover of the book:

There is no denying the call of the sea.

Elysandra Winters has always yearned for a life of adventure on the rolling seas and is willing to do whatever it takes to fulfill her dream. When her Privateer father continually refuses to allow his only daughter to sail, Ellie defies him, disguises herself as a boy, and goes in search of a captain who will give her a chance to prove her worth.

Thanks to the cursed selkie blood coursing through his veins, Daniel O’Rourke needs the sea to survive. After giving up on his humanity and spending three years in seal form, he decides to give his human side another chance. Daniel goes in search of a job and a sense of normalcy, earning himself a position aboard Captain Winter’s ship, The Surf Runner. However, his new captain’s first assignment has nothing at all to do with sailing, and everything to do with his headstrong young daughter.

Years later, when the leader of a band of bloodthirsty pirates murders Captain Winters, Daniel and Elysandra’s lives come crashing back together with the force of a hurricane. Both experts in deception, they must find a way to trust each other if they are to have any hope of hunting down the captain’s killer.
When it comes to covers, I get all weak-kneed - especially if the cover is as gorgeous as this one.

A wonderful storyline, a beautiful cover... I LOVE it, and I'm really looking forward to read it.
Rebecca Hart's Call Of The Sea will be published by Inkspell Publishing. Release date. June 2012.
What do you think of the cover? Would love your thoughts about it.
Posted by Cecilia Robert at 06:22