A review of Three Days,Two Nights by M J Fredrick 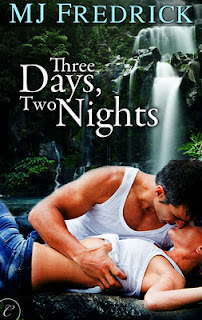 Author: M J Fredrick
Word Count 19000 words
Source: Netgalley
Publisher: Carina Press
Pub. Date: 24 October 2011
Genre: Adult Contemporary Romance
Description:
Nathaniel Reis screwed up. He put his career as an air force pilot before his marriage to Tess, and wound up divorced. Now that he's left the service, he has a plan to fix things, if only he can get her alone for a few days.


When Tess misses her flight to a corporate retreat, Nat's there with his island-hopper plane and a plot to get stranded in paradise thanks to "mechanical problems." But his plan goes awry when a storm blows them off course and they have to make a realemergency landing-and not on the island where he's stashed supplies.


Tess is furious. She's anxious to get to her retreat, and away from Nat. She's even angrier that being so close to him arouses her in a way she hasn't been for a long time. Rescue can't come soon enough, but in the meantime, she's going to have to trust Nat to keep her safe. Even if she's in danger of falling for him all over again.
19,000 words

Three days, two nights was a good read, a book about second chances. The book begins one year after Tess and Nat’s divorce. Nat, after losing Tess after putting his carrier before marriage is determined to get her back. After she misses her flight to her retreat, courtesy of Nat with his plan to woo her back in his life by taking her to a an island where he is to romance her. Unfortunately, everything goes downhill as a storm blows them of course and they end up in the wrong island, living Nat to improvise.


The characters were well developed, and M J Fredrick did a good job of creating tension between the two, and the attraction between them.
I enjoyed reading this short story. It did feel a bit rushed nearly the end once they were rescued, but was satisfied with their Happy Ever After, given their past relationship.
Would recommend it to readers looking for a quick romantic read.
4/5 Stars
Posted by Cecilia Robert at 02:13